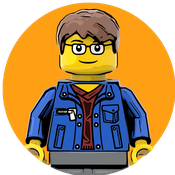 By Cristhoper_dh
101 comments
Hello friends, I present to you my project of a fire station, which has the capacity to store two fire trucks, it also has the typical tube where firefighters descend, I also included beds For those brave men who fight against it to rest  fire and one bathroom.
I was inspired by the real fire stations in my country, Chile.  Since they are attached to other buildings in the middle of the city.  It also has the typical doors that lift to let out fire trucks.  My project is modular, I built it like this because I think that in Lego cities it would look great together with other modular ones, so each builder chooses where to put it.  inside it has typical LEGO city firefighter accessories.  on the roof brings a helipad to pose a helicopter or a drone, with LEGO everything is possibly incredible.
Many fans of firefighters would like to see a modular station, also use the current, modern architecture and typical firefighter colors, which I hope you like.  Use as few as 2350 parts. I included, a fire truck, a rescue truck with tools, 8 minifigures of which there are two twin brothers, a driver of the truck, a helicopter pilot which is me, the other figures are typical firefighters, also add a dog and a cat.