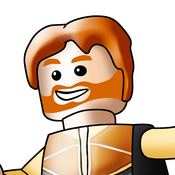 I have updated this project to fit in with LEGO CUUSOO's new guidelines. Originally this campaign was for several kits, but now I am splitting them into different projects. This campaign is for the adventure cave set 'Skeleton Scare'. In this project there are no Lego Logos, non-Lego elements or proposed new molds. Everything in this project can be made out of exisiting LEGO, bar a few new printed decals for the minifigs. 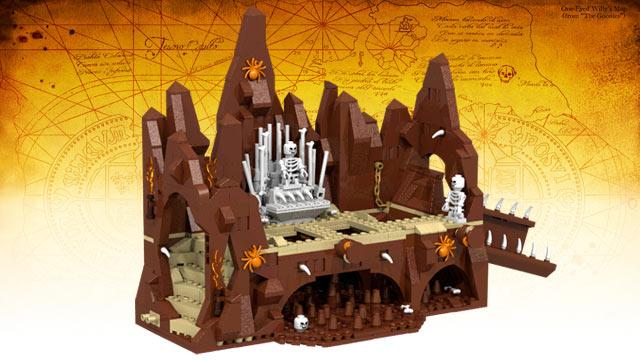 Now to business. The Goonies is one of the most iconic movies of the 1980’s. It gave us adventure, pirates, mobsters, the loveable Sloth and of course, the Truffle Shuffle! It was an action packed movie told through the eyes of children.

In 2015, the Goonies will be 30 years old, so what better time than now to start a Cuusoo campaign to reignite Lego’s interest in this franchise in time for the celberation? With the success of the Back to the Future set, and Ghostbusters in review with Cuusoo, there's definately enough interest in retro movies from the 80's to warrent this.

My campaign offers up all our favourite characters in Mini-Figure form, and the different projects work as interconnecting sets, which will help kids (and adults) to re-enact the story from start to finish. So please check my other projects out too. 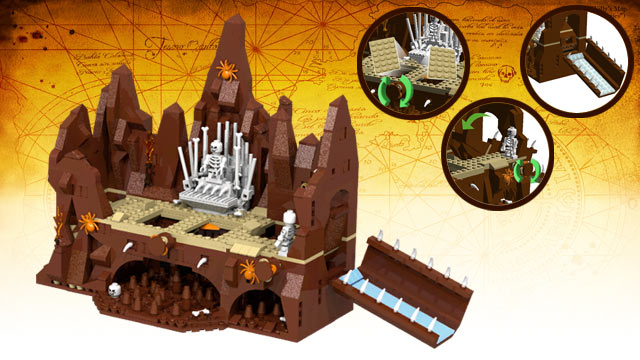 Above is the first set I designed for the campaign, ‘Skeleton Scare’.

This scene helps re-enact the moment in the film that the Goonies have to play notes on a scary musical organ made from the bones of pirates. If they get the notes wrong, the floor caves in, revealing jagged rocks below. If they play the notes right, they open the secret panel which reveals a water slide that they will eventually ride down to discover a wonderful pirate treasure.

I took a lot of time to design ‘function’ into the set. Most Lego playsets today have some kind of interactive quality. So I have made the floor collapsible, as well as a lever to lower and raise the secret panel. The cave under the main scene is full of 'jagged rocks' but is big enough to fit minifigures in and the cave is littered with skeleton parts. So there are lots of things to play with.

I also made a point of trying to make the cave as exciting and interesting to build as possible. This is not just a ‘box’. The cave walls are carefully crafted to reflect the organic nature of the underground environment.


Of course like any major Lego franchise, there has to be Minifigures. I have designed all of the Goonies, as well as Sloth. I also intend to design the Fratelli's, the bad guys of the movie.

Data appears in 'Fratelli Fracas' while Sloth and Chunk will make an appearance in the pirate ship 'Inferno' set. 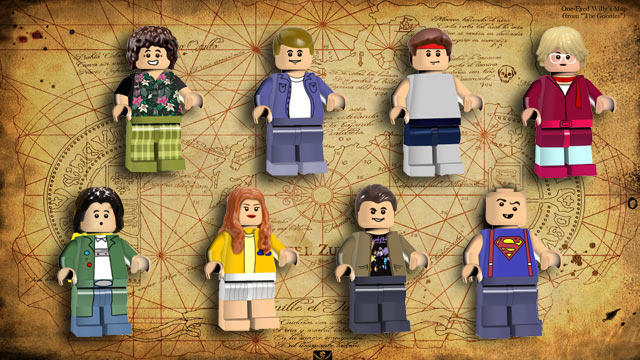 Above we have closeups of the minifigures I've designed. Apart from the various 'print' requirements all the hair pieces are taken from other sets.

I am working on the Fratelli's too.