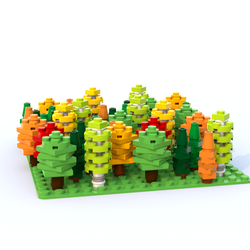 The CN Tower is one of the tallest structures on earth.

It was once the tallest structure on earth until Burj Khalifa broke it's record. I built this to a 1:1000 scale. The real tower is 1,815 ft tall, but I brought it to just a little under 2 ft.

At night, the real tower's central core lights up with different colors. I made a thick base underneath the tower and placed a Lego LED light to shine up through the transparent center. When pushing the red button (shown in the pictures above) the light will turn on. You can also keep the light on if you tighten the clip on the side where the button is (also shown in the pictures).

My Lego version is 16x16 studs wide and 72 studs tall. It is made up of 470 bricks and would probably be priced around $50-$60. It's colors are pretty accurate to the real tower. It looks really cool and will be nice with its light on. It is also perfect for going on display on a shelf or desk.

Thanks for the votes!