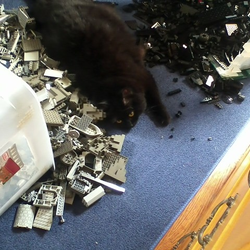 The Colossus in medieval times was considered one of the wonders of the world. It stood guard at the city's port defending against enemy ships. My LEGO Colossus stands roughly 26 bricks high. It would be an intimidating sight for any intruder into the LEGO Kingdoms. The goal was to create a larger replica of the LEGO Mini-figure, a statue that allowed for small ships to pass underneath.

The LEGO Knights have always been a favorite of mine. They combine play with history and allow for lessons of chivalry. The Colossus adds an element yet to be brought to the LEGO universe. It shows that the Knights, Kingdoms and people of Olde were capable of creating great wonders.

I think this set would be of medium difficulty to build. The angle of the legs and attachment of the body were the most troubling parts. The arms have Technic pieces as extra support. The set includes some fun features such as a prison in the right leg and the chest which opens to allow knights to defend against enemy ships. I've included two knights and one rouge soldier which I think would be a perfect compliment to this set.