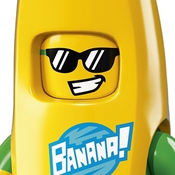 This is a set I designed for a few reasons. 1: I haven't been able to publish a set in a while, 2: I want to start making LEGO animal armies and mechs, and 3: (most important) I like squids.

This set includes three minifigures: The Pilot, a pink squid armed with a detachable stud shooters, The Warrior, a blue squid armed with a strong trident, and General Crabclaw, an odd lime green squid with golden claws and a commander's staff.

The mech itself can serve many purposes with its amazing selection of weapons, from the stud shooters with harpoon details, to the laser drill on the bottom, and then to the massive electro cannon on top. I imagine this mech to be a sort of all-terrain vehicle, able to swim in water, crawl on land, and even fly high in the sky. The set contains 313 pieces, and the mech sports a green squid symbol on the back, and makes an interesting addition to any collection for any LEGO lover such as myself!

If you like this set, or wish to see more animal armies, please support and leave comments! Thanks for viewing!