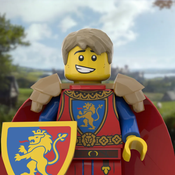 By C0eurDeBrick
29 comments
After a well-fought battle, His Majesty the Emperor decided to organize a ball so that these soldiers could celebrate their victory.
This construction therefore depicts a soldier dancing with his wife, observed by the Emperor on the balcony.
Special features of the construction:
- The centre of the scene can be rotated using a more realistic lover dance.
- A 3x2 tile piece represents a civil code that the Emperor would have stop writing to take part in the festivities.
- Two pieces 2x6 tile represents a painting of the emperor.
This set contains:
- 419 pieces.
- 3 figurines.
I thank all those who will give me their vote and support my creation by sharing it.