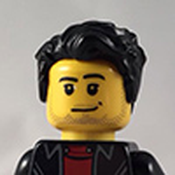 The Meyers Manx was the first ever dune buggy model created by Bruce Meyers in 1964, made out of a fibreglass kit on top of a VW Beetle chassis. Named after the Manx breed of cat due to its stubby design, it became an icon of the 60’s, inspiring other buggy designs and even nowadays it still has a strong fan base.

This roughly 1:20 scaled Technic replica of the infamous off-roader in bright red, just like the very first model that still resides with its creator, features the following:

Building it in the Technic system allowed to recreate its curved design much easier, as well as the possibility for people to customize and build their own add-on accessories or mods, such as a roof or even a complete recolour, while still keeping it accurate to its real life counterpart.

Thank you for checking out and supporting this project!