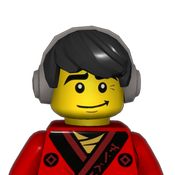 By gabeschmidt
105 comments
Wassup Nine-Nine?
Brooklyn Nine-Nine is one of the most popular shows currently on television, supported a passionate fanbase that even helped save the series from cancellation. I fell in love with the series because of its unique and colorful characters and whimsical take on normally serious topics. I tried to bring the spirit of the show into this model by recreating the most iconic rooms of the titular 99th police precinct.
The working elevator doors open up into the bullpen, featuring the detective's desks, each containing props referencing memorable scenes. Doors on either side lead to the break room and Captain Holt's office, featuring more fun details to recreate fan-favorite moments. Aspects of the larger precinct in the show are condensed into this space to create a model that is only 62 studs long by 22 studs wide. I tried to make the model large enough to capture the iconic aspects of the location, small enough that it's something LEGO could actually produce, and sturdy enough that it didn't break when I had to move it.
The set features (fittingly) nine figures. Included are Jake Peralta, Rosa Diaz, Terry Jeffords, Amy Santiago, Charles Boyle, Gina Linetti, Michael Hitchcock, Norm Scully, and Captain Raymond Holt. There more characters from the show I would have loved to include, but the number nine was a good way to limit myself and not go overboard.
Hidden references: Terry's mannequin incident, marshed mallow, Terry's yogurt, Algernon the mouse, Nikolaj's present, Monty Hall doors, Boyle's muffin, month-old Chinese food, purse with hairdryer, Jacinta the space heater, bottle for bullpen bowling, guitar for interrogation, Holt's hula hoop, business card with gum, CJ's bongos, Holt's medal in his safe, and more.
With shows like Friends and The Big Bang Theory being made into sets, I wanted to create a build similar to those sets so, maybe someday, Nine-Nine can be made into an official LEGO product too. If you want to see that happen, give this project a support and share it around. If Nine-Nine fans can save the show from cancellation, I know we can get a LEGO set made.
NINE-NINE!