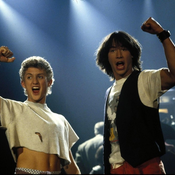 Greetings, my excellent friends! This most triumphant LEGO set is based on the totally tubular 1989 movie Bill and Ted's Excellent Adventure. The set features Bill, Ted, Rufus, and the phone booth, including a swinging door, a removable roof, and a phone inside. This righteous LEGO set would fit in with the rest of the upcoming '80s film sets, including The A-Team, Beetlejuice, E.T. the Extra Terrestrial, The Goonies, Gremlins, and Knight Rider.

In the movie, a man from the future named Rufus provides two slackers students named Bill and Ted with a time-traveling phone booth. The two use the phone booth to round up historical figures such as Napoleon Bonaparte and Socrates in order to pass their history project. If they fail, they'll never form Wyld Stallyns, the greatest band of all time, and their music will never bring about world peace. Don't be bogus, support this project!