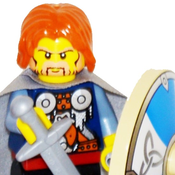 thank you for clicking on this idea!

It is my first own creation to be presented at Lego Ideas.

Grown up in the 1980s, I experienced my first Lego medieval ships in the late 1980s. As I am very interested in Medieval and especially Viking culture, I had the idea to create a detailed historic Viking model which can be used either for play or as a pure display model.

The model shows a historic Viking trading ship type Knarr / Knorr (ca. 9th – 11th century). The Knarr is – compared to the by far more famous longship – a slower but also significantly more robust ship type. It was mostly used for trading. Especially in the beginning of the Viking times the Knarr was well known as England sailor. Later the Knarr became more popular for Viking settlers and transatlantic crossings. In the Iceland area several settlements contain the name Knarr due to the settlers ships.

Compared to the longship, the Knarr is mostly sailed and only rarely equipped with rudders.

Backbone of the ship is the good old Lego 7018 Viking ship, but the Knarr is shorter and oval built. The sail is also from 7018, a design adjustment might be a future option. Livestock elements are from Lego 10193 Medieval market place. Cows from Lego 7637 farm might fit even better to the set. And for all classic pirate fans I used a sail from Lego 6274 Caribbean Clipper as cargo tarp. For a perfect model the tarp design could still be adjusted in future.

The Model in a Nutshell

Lookin’ forward to your feedback!

As it is my first model, I am very open to your constructive critic.

Feel free to share the link to this model with your friends and followers, so we’ll reach 10,000 votes together.