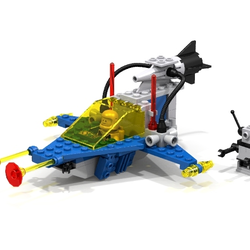 This is my Lego City sized Wildcat Off-Roader. I wanted to create a small vehicle that's fun to build, great to look at and even better to play with! This is a true off-roader!

The suspension is a very slightly modified version of the one found in set 42001: Mini Off-Roader, which works with 2 elastic bands. I adapted it for some possible clearing issues and the ability to put a studded structure on top. The shape of the car itself is inspired by the famous Bowler Wildcat. I tried to put in as much detail as I could working with a 4 stud wide structure and I think it looks the part!

I own the 42001 and this thing is pretty much indestructible, and although it can hold a mini-fig it just doesn't fit in with the City theme very well. But I really loved the suspension and thought how cool it would be if a City themed car could be made with this simple but very effective suspension.

As the base and the car can be separated you can always build your own creation on top of the suspension, which I feel is the whole idea behind Lego.

I hope you like and that it reaches 10.000 supporters!

You can also check out my other project! https://ideas.lego.com/projects/82843