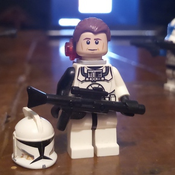 Deep in the desert, there is a Shack.
It may be in the Sahara Desert, the Arabian Desert, or maybe even somewhere as exotic as Jakku or Tatooine. But anyhow, it's there. Built out of castoff junk, the shack has sand blown on the top of it's roof, and through its partially complete walls. It looks deserted, but in this kind of area, you never know.
The Walls are built from a large assortment of pieces, of many colours. there are a few small, grimy windows, and a ventilator-that don't work anymore-but used to keep the sand out.
The Roof (Which is detachable) is covered mostly by sand, and has an tall antenna-which used to be able to pick up radio signals from nearby settlements-but now the sand has got into every little part of it, and it doesn't work anymore
The interior is small, and contains just a few things:
I built this set a few years ago, and recently found it hidden in a closet. For a few months now, I've been refining it, and then recently digitized the build. I decided to submit it because I feel like Lego doesn't have enough sets that look sort of grungy. Most Lego sets are very nicely designed (and this is no different), but are very neat. I quite like the idea of a Lego Set that, while still being nice to look at, has a bit more of a messy feel to it.
If you liked this Idea, view some other of my submissions Here.
I am already working on another Idea, which will be much larger, and looks very good so far.
I really appreciate your support!
Thank you so much!
This was built in Lego Digital Designer 4.3, rendered using Bluerender, and edited using Photopea.com