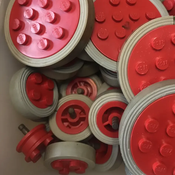 By Lownotes
38 comments
Old-school analog mixing board/desk, featuring moving faders with updated LED (LEGO Emitting Diode) level meters. Monitoring/listening is via wireless headphones.
Multiple channels with lots of inputs, outputs, and knobs galore!
Influenced by my years of using sound equipment and even more years of building with LEGO.
I built this because of my familiarity with the equipment, I've not seen one like it, it's not too many pieces, and it's received great feedback from those that have seen it, both in person and in photos.
Ironically this analog mixer was born in the digital world of Studio before being constructed in bricks.
Update March 23, 2022 - Added photos to highlight the meter bridge and the master output section, that now includes the missing piece!
Update April 16, 2022 - "The Cans" (cool, hip studio jargon for Headphones) have been rebuilt for much needed stability, as well as improved improved wireless connectivity. New photos of the 'phones (almost as cool), as well as the mixer.
Thank you to all for your support and comments!