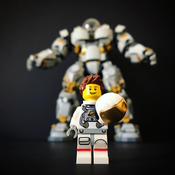 By ProfessorBurro7
23 comments
This is the Space Police Mech !!!
Sometimes to fight space criminals, the police have to use special machines. This exoskeleton allows you to fight space crime to great effect!
The policeman enters the robot's cockpit and controls it as if it were an extension of his body. The robot has movable arms and legs, a precise grip of the hands, a transparent dome from which the pilot can see outside. It has a protection shield, an indicator light and control lights. In the back there are special turbines that allow the robot to fly and under the siren's flashing light you can attach the space policeman's oxygen cylinders. The policeman wears the cylinders only when he gets out of the cockpit of his exoskeleton, because when he is inside he does not need them. The large feet of the robot guarantee stability, while the articulated joints allow a great range of movement and the robot can assume many different positions. He is also gifted with great balance!
Robot colors match the space police uniform!
I built the Space Police Mech to play with the imagination by inventing galactic stories of battles between good and evil ... With the Space Police Mech the fun does not end with the construction, but continues indefinitely with all the stories that they can be invented by playing with this robot and its pilot! For this I think it can be a fantastic Lego set !!!