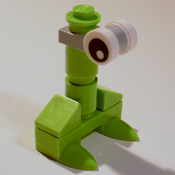 By C_Studios
19 comments
This is a 3 dimensional timeline built in lego bricks. This build is 100% lego and does not have any cut pieces or suggestions for new parts. I don't even know how to create new parts. I was looking around my room and noticed 3 small models I had already made: a pyramid, a castle, and a factory all built out of legos. I then had the inspiration to link them together to make a timeline. I also built a few extra models to be other places in time. I placed them in order on a few baseplates and then I rebuilt it in stud.io with more tiles for a smoother look. Each time period is on a 6 x 6 plate, and there are 8 of them. They are, in order:
I think this would make a good set because it is educational and looks pretty cool. I made this model in Stud.io because the renderings look awesome and because of the unlimited bricks. This model has only about 250 bricks. If you like this build, then support it and check out some of my other projects. Don't forget to share this build! Thanks! :)