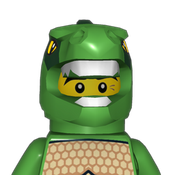 By LegoSonny
4 comments
This space walker is a scorpion-like model with weapons on its front and back. The surface is uneven, making it old and rusty. It has been maintained by computers. The tail contains a pair of cannons, made from traffic lights, and the claws are made from joints of a submarine.
Generally, it is composed of many LEGO sets. It involves a crane anatomy, and arctic snow skin, a jungly pair of legs, some roadworks, half a submarine, a police sign, a computerised ladder and parts of a cargo train.
You can position its legs into different positions so it appears to be moving. The cannon can be adjusted to most positions, and the cockpit can rotate. The cockpit can be easily detached and reattached to make it fit in thinner storage spaces. The plastic bubble that protects the driver can open and close, so that there is room for the driver to sit. The claws can open and close, and they can swivel in any direction.