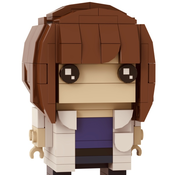 The Gibson Les Paul is a solid body electric guitar that was first sold by the Gibson Guitar Corporation in 1952. The Les Paul has been continually produced in countless versions and editions since. Along with Fender's Telecaster and Stratocaster, it was one of the first mass-produced electric solid-body guitars. Les Pauls have been used in many genres, including rock, country, pop, soul, rhythm and blues, blues, jazz, reggae, punk, and heavy metal (Wiki).

I designed this Lego model for my friends and family who enjoy playing music and love guitars. It would make an awesome gift for musicians, both professional and amateurs. Designing it was a pleasure and I am hoping to share this enjoyment with all of you Lego Fans out there!

This world famous guitar can be built in two options: with Bigsby or without it. Both of them represent classic familiar body shape of a Les Paul and feature unique style pickguard, pearl gold control knobs, two pickups, frets and nut, and simulated inlayed fret markers. Both versions can be equipped with real strings using the tuning posts and bridges.

It is possible to include additional bricks necessary to build Bigsby with the No tremolo version for optional installation. This guitar can be built in almost any color combination.

This Gibson Les Paul was designed to be displayed on a stand or mounted in a frame. Intensive play is not recommended due to the thickness of the body - it only 2 bricks thick - and the weight of the neck and head.

I hope you like this guitar and support this project! Thank you for your time, interest, and support!