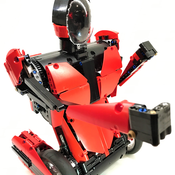 "I'm gonna knock your block off!"

This project was inspired by Rock'em Sock'em Robots and Real Steel, the movie.  The idea was to take the concept of the original game, modernize it, and make it so that it could be enjoyed without a boxing ring.

The arms are mounted on turntables and are easily removed using the black linchpins.  The configuration extends the arm while rotating the shoulder.  They are each powered by a PF servo motor so they function similarly to the original game.

The legs are motorcycle wheel and tire assemblies mounted, again, to large turntables.  They also can be removed by pulling the black linchpins.  They are each powered by a L PF motor and connected via a planetary gear transmission.  Originally, I attempted to use tank treads for locomotion, but after testing multiple assemblies, I found the motorcycle wheels to be the best for this purpose.

The head is mounted to a soft spring and uses a single stud to latch into place.  The latch and spring provide just enough stability to prevent the robot's head from falling while moving while allowing it to be "knocked off" by the punch of another robot.  The clear cockpit covers give the head a humanoid shape and allow the LED eyes to shine through.

The housing for the battery pack is spring-loaded to prevent it from opening during normal operation.  To change the battery, simply tilt the chest backwards and the battery rotates from a vertical (locked) position, to a horizontal position that allows it to slide out on rails. To load the battery pack, slide it back in on the rails, close the front panel, and rotate the chest forward.  The springs will cause it to lock in place.

The remote control was designed with ergonomics in mind.  The handles are easy to hold for adults and children over 5.  The arms of the robot are operated by index fingers (triggers) and the legs are operated by the thumbs (thumbsticks).  Rubber padding was added to make it softer on the fingers and easier to grip.

For cost saving, the robots can be sold individually and in one color.  I built a red and blue one to demonstrate how they work together and as an homage to the original game.

Why I believe this would be a great lego set...

I found this project to be a great way to spend time with family.  Building this might be a challenge for a child under the age of 10 alone, but, as I experienced, building it with my child was a fun time and a good opportunity to teach her new concepts in mechanics.  Additionally, after sharing these with friends and family, I realized both adults and children enjoy playing with these either as a single robot or as a dueling pair.