Fishing Adventure (With a Twist) 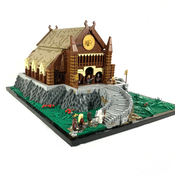 By theLOTRbuilder
104 comments
Bob likes to fish. He likes to go to the same dock every week and catch several fish in order to feed his family. Unfortunately, Bob doesn't realize that the pond has recently become home to another guest...
There is a look of delight etched on his face as Bob reels in his second catch of the day. The autumn trees are a beautiful sight in the sunshine, and the leaves haven't started to fall off yet. The grass is green, and the little dock is as creaky as ever. But Bob fails to notice the rippling of the water as an unexpected foe approaches.
The tragedy of this story is great. Bob is forced to leave the fish he caught behind! (Though he escapes with his pole). Soon, an all out war begins against the man and his reptilian foe, in which many fish do not survive. Where battle occurs, innocent death occurs.
What is the moral of the story? Never try to fight an alligator.
This build contains several hundred pieces, and I tried to include lots of nature details. Thanks for checking this out! Please support!