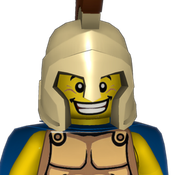 By aussietrooper20
21 comments
In Australia, there’s a sport that people love and cheer to, known as the Aussie rules, and it’s  also known as AFL in a better way, but despite the men playing this sport, the women do too. These two BrickHead’s are dedicated to this sport in the form made out of LEGO. Sport games are a way we show how our brains work, just like we do with LEGO. This set is a sign that we can play sport weather we are male of female, just like we can play with LEGO wether we be male or female. The set comes with a cup representing the cup won by the winning team, and plants seen about where players play the game, namely the grass areas. Both these Brickhead’s have the same number ten on there backs based on two great female players in this sport. This set would make a great set to the brickhead collection and a part of Australia to every LEGO fan on earth as footy players in this game come from many countries to play it in Australia. Some come from America and some from different European countries. If you love this game, and love women playing sport, this is the LEGO Idea to have in your collection. Thank you.