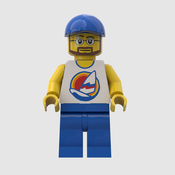 By Rothriguez @ Brick Homes
57 comments
This is my first attempt here. I wanted to recreate the Pompejanum - a replica of an ancient roman villa in Pompeii. It was build in the 1840s and is one of my Hometown Aschaffenburg's landmarks.
This architecture style model is built in a similar scale to the LEGO Colosseum I guess. I tried to get as many details as possible in such small scale and with LEGO bricks. Overall it contains 779 pieces, and I tried to only use bricks in colors that actually exist.
I think this would make a great Set because there is a lack of architectural Sets in my opinion and this could be a great addition to any LEGO collection :)