By skywalker89
18 comments
For a long time, and especially since the release of the Chronicles of Narnia film franchise, LEGO fans have been building, creating, and designing Narnia-related sets. And it is no wonder - the series is full of action and adventure, as well as strong male and female characters that children can identify with. Plus, the story affords the LEGO Group the opportunity to invent new parts and bring more rare pieces into more common use. For example, a new piece that might be used is centaur legs. Beavers are animal figures that we have not seen before in LEGO but would be a must for Narnia. Minotaur headpieces could be reused. All in all, Narnia could be a very profitable venture for the LEGO Group.

This set is my second in a series that I will make that will span the three films already made, and perhaps even take an imaginary look at some of the other books that have not yet achieved film status. My goal is always to design sets of a high quality.

While simplified for this LEGO set, I have tried to capture a small piece of that grandeur - especially by the use of the marble statues found guarding each king and queen's most valued possessions. This set could be a medium-sized set that ran around $20 - $25 USD, or it could be split up and each Pevensie child/alcove sold as a separate set averaging around $10 - $12 USD. Selling them separately could increase purchases and collectability, and would definitely increase profits. Either way they were sold, the alcoves could also be connected via hinge bricks. 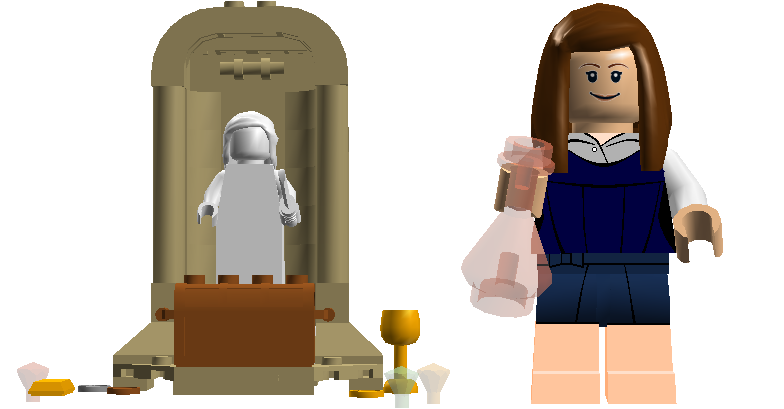 Going in counterclockwise order, we will start with examining Lucy's minifigure and alcove. The actual structure of Lucy's alcove is identical to that of her three siblings' alcoves, and is almost entirely constructed of tan bricks (though dark tan could also be a viable option). The real difference between the alcoves lies in the marble statue that is designed to represent each Pevensie as king or queen. The statues are composed of white pieces, including a white 'marble' base. Lucy's statue includes the traditional 'princess' hair piece. The statue is also holding a white version of Lucy's dagger (one of her gifts from Father Christmas). This is designed to be symbolic of Lucy's royally stylized name: Queen Lucy the Valiant. Like her brothers and sister, her alcove comes with a treasure chest and a variety of treasures to place inside.

Lucy's minifigure itself is designed to reflect her appearance in this portion of the 2008 film. Her main torso is dark blue and has printing on it to reflect her school jumper. The arms are white. Her legs are light flesh (she is barefoot in the movie) with dark blue printing on both the front and sides to continue the design of her jumper from the torso. The leg joint is also dark blue. Her face is double-sided with a happy/angry expression. Her hairpiece depicts her straight hair and is actually the same as Ginny Weasley's hairpiece from the Harry Potter line, only in reddish-brown rather than dark orange.

Lucy comes with two accessories that are exclusive to her - a transparent red "bottle" representing her magic healing cordial and a silver-gray dagger. 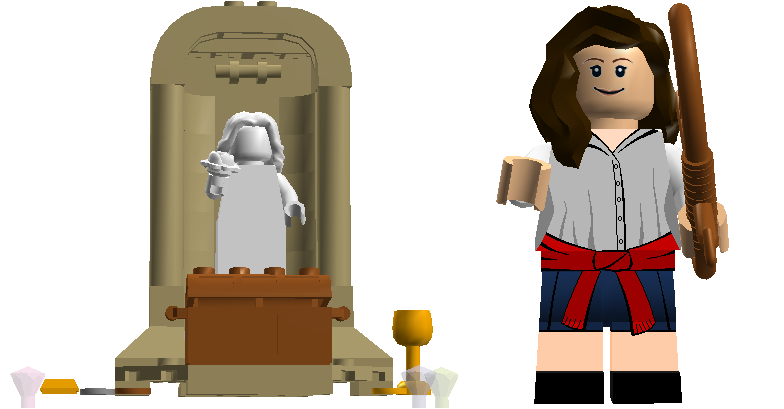 Susan's alcove is the same as the others, excepting the statue of her as queen. Her statue's white hairpiece is one commonly found in the Collectible Minifigures line (i.e. Pop Star, Fitness Dancer, etc.). Her statue also holds a rose, representing her royally stylized title: Queen Susan the Gentle. Like the others, her model includes a chest and a variety of treasures.

Susan's minifigure is also based on her film appearance at the beginning of 'Prince Caspian.' Like her siblings, she is still wearing her school clothing, though she was not originally clad in a jumper like her sister. Instead of dark blue, her torso is white, with printing representing a button-up shirt that is slightly ruffled and undone. Her light flesh legs have dark blue printing on them depicting her school skirt. Her feet are printed black on the front/sides to give the appearance of shoes. Again, the leg joint is dark blue. Also spanning the legs, joint, and torso is red and black printing depicting her red school sweater that she wears tied around her waist. Her face is also double-sided with a happy/angry or determined expression. Ideally, it would look different from Lucy's. Her hairpiece is dark brown and is the wavy shoulder-length pattern parted over the shoulder most famously seen on Elsa Schnieder (Indiana Jones) and Narcissa Malfoy (Harry Potter).

Susan also has two accessories that are exclusive to her: a dark orange longbow (her magic bow from Father Christmas) and a corresponding white sheath of arrows. As an option, the arrows could have paint/printing on them, showing the characteristic red feathers. 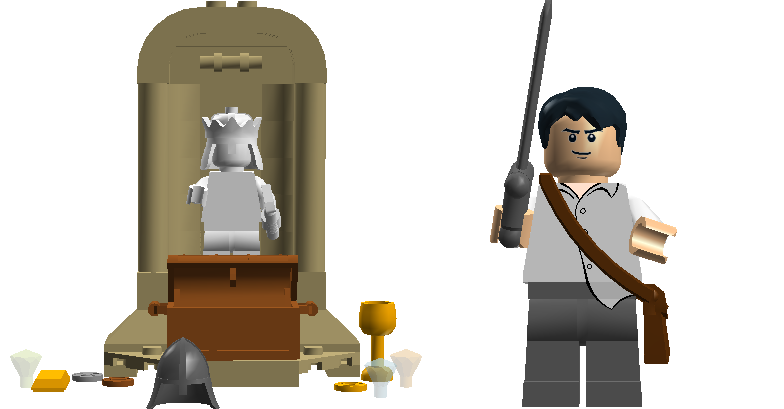 Edmund's alcove, like those of his sisters, is constructed primarily out of tan / dark tan bricks with a possibility (like the others) for some slight color variation to add variety. He too has a treasure chest and a variety of treasures to put inside. The main difference, again, lies in his 'marble' statue. Rather than a hairpiece, Edmund's statue sports a white version of the crown headpiece used for the kings in the Knights Kingdom and Castle lines developed by the LEGO group. The 'stone' representation of King Edmund the Just fittingly holds a gavel with which to pass judgment.

Edmund's minifigure is a bit simpler than those of his sisters, especially when it comes to printing. His torso is white, with some black and flesh printing on it to depict his button-up school shirt. His legs are entirely dark bluish-grey, with a small amount of white and black printing on the joint and one leg to depict a slightly untucked shirt. He would, ideally, have a double-sided face. His accessories include a dark brown satchel, a flat silver sword, and a flashlight (not pictured). In addition to his accessories, Edmund also comes with an alternate headpiece - a battle helmet, which he can be seen wearing in this scene in the movie. 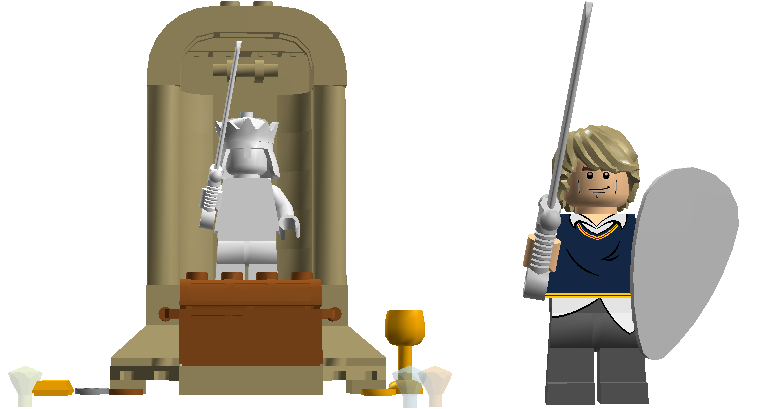 Once again, Peter's alcove is identical or nearly identical to the others and comes with the treasure and treasure chest. His statue is also almost completely identical to Edmund's, with the exception of holding a white version of his sword, Rhindon, in his hand - denoting him as High King Peter the Magnificent.

Peter's minifigure comes with a tan / blond sideswept hairpiece and a double-sided face. His torso is dark blue with golden yellow, red, black, and white printing on it which depicts his school sweater and colors, as well as a collared shirt sticking out from underneath. His arms are white, continuing the idea of the collared shirt. His dark bluish-grey legs also have a printed depiction of his untucked collared shirt sticking out from underneath. For accessories, Peter has a chrome silver sword (Rhindon) and a flat silver shield. Ideally, this shield would come with printing on it as well, depicting the marching red lion that represents Aslan and decorates most all Narnian battle attire.

I hope that you agree with me about the great potential that Narnia LEGOs may have. Continue to check back as I expand my set designs for the Narnia line. I will post links here to new projects as they are approved. Thank you for your interest, and please consider clicking 'Support'!