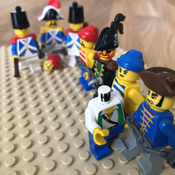 Welcome on board of The Rolling Dutchman!
Since I have been a child I always wanted to control my LEGO Red Beard Runner without pushing it around and now my dream has come true. I have build a motorized Version of the famous Flying Dutchman which is my favorite pirate ship, too. I have seen the original swedish Vasa which has given the idea for the Dutchman with its marvelous bow and stern. So I managed to combine them with my own creative ideas into this rolling Dutchman!
Please have a look at the features in the video and the pictures!
Video:
Video how the functions work:
Update 2:
Thanks for your 1k supports so far!
I have worked on the main picture a bit and now added a picture of the crew and one showing the functions as well.
You can find all the fotos until now here: https://flic.kr/s/aHsmMnLn6a
Update 1:
New rotten Sails! (Picture 7+8+Video still with the first sails)
Motorized Features:
General Features:
It would be an honor to receive your support. Aye!
I have to thank my friend J-H to help me with some motorization problems and a special thanks to my girlfriend for not freaking out!
Thanks, yours Störtebricker from Hamburg, Germany