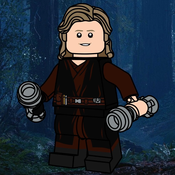 By ItsAidakin
15 comments
This is the stage area that Ariana Grande performed her songs from her "Positions" album on. This features all the musicians that played these songs live, as well as Ariana Grande herself. This also includes all the instruments used in the live performances, and they can be easily removed from the build for separate display. Also included, is a 2x6 tile that says: "Ariana Grande 'Positions'". It also has the light that was elevated above the stage during the performances. This model is 653 pieces and would make a great display model among the other music related sets that have been released.