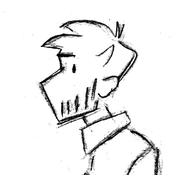 By yannickbuildsthings
138 comments
This model is a recreation of the original Bionicle Toa Head element, the iconic face behind the Masks of Power.
The launch of Bionicle in 2001 was full of awe-inspiring concepts and contrasts: mechanical beings living on a tropical island, and giant robotic faces carved out of stone throughout a life-filled landscape. Inspired by those megalithic Toa head sculptures in the art of Bionicle, I began building this model more than five years ago to try to capture some of the wonder they inspired in me as a child.
2021 marks 20 years since then, and I feel this would be an appropriate anniversary set for the theme. Additionally, the recent popularity of Bionicle in the LEGO 90th Anniversary Set poll has shown that there are still very, very many fans who are eager for a return to the theme. I believe that this would be a successful LEGO Ideas set because it appeals to both longtime Bionicle fans and to LEGO System builders by merging iconic Bionicle visual elements with the classic brick-built LEGO style.
The stand for the statue is based on the Kini Nui, the Great Temple at the center of the early Bionicle storyline. It features four vignettes referencing the early storyline: a silver Kanohi mask from the Quest for the Masks, an orange Ussal Crab emerging from the jungle, a pair of interlocking Technic gears, and the beige Mata Nui Stone and black Makuta Stone used to recount the Legend of the Bionicle. Finally, the back of the statue includes one more reference to early Bionicle lore: the letter "B" carved in Matoran writing.
Similar to the recent Star Wars helmet sets, this model stands just shy of 9" (22.5 cm) tall, and uses 597 parts. It would look great displayed on a desk or a shelf!
Finally, the model also uses a minimal amount of proposed recolored parts – only four, including a silver version of the Kanohi Hau released in the 2010 Bionicle Stars line.