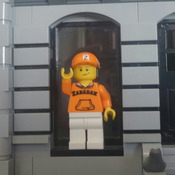 The Maersk train set could use some supplements.

Butt still there was something missing. A crane to load and unload the containers from the Maersk truck or train wagon.

There was two rules. The mobile crane , however, had to handle the original containers. And hoist 2 containers  on each other.

So I searched on the internet for pictures. It was then that I decided that the cabine should be at the front. Also the idea emerged to use half sized containers.

Data from the model;

The top of the boom, can rotate about 320 degrees

The back side of the crane is heavier for counterweight, when lifting de containers.

The model itself contains approxiomately 125 bricks

For any set, it is of course nice when (half) containers and a minifigure is included

So let me know what your thoughts are of my idea