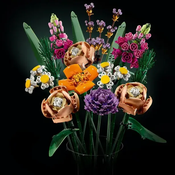 By cuddlytiger
16 comments
VAIANA: PUA TREASURE BOX
Here is a reconstruction of Pua, Disney Vaiana’s sidekick. Having been a Disney fan since forever I just went for a lovely character, but with a different proposal: a Pua shaped treasure box.
In that view Pua becomes not just a faithful reconstruction of the cuddly piggy everyone remembers on Vaiana’s canoe, but a reinterpretation of it to create a Lego set that can be used to store tiny things you really care for, and yet recall the lovely looks of Pua.
I thought that every Lego fan just needs some safe, not bulky, nice to see place to hide tiny personal belongings, and that might be just a great idea! You can keep it on your table beside your computer, or just in the entrance of your home as a place to store keys, but there's no limit to whatever one can store in it: just has to be tiny.
It is a styled box, and it does have all the features that make it resembling to the cute piggy, though retaining its featuring storing purpose. So you'll find tiny piggy paws, a curly grey and white tail, cute white and pink round edged ears you can actually move through hinges, a round pink and white nose with brown nostrils and, last but not least, just remove a lid on its back and you'll have access to the storage compartment inside its belly.
Hope everyone will like it!