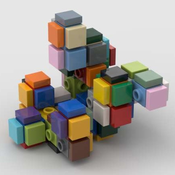 Short Description: This is a display model of the Raspberry Pi 3 B+ (not the dessert), an affordable tiny computer capable of a great variety of amazing things.

About the Raspberry Pi: Presenting the third best-selling general purpose computer in the world: Raspberry Pi has nothing to do with delicious dessert but rather a credit card-sized computer board capable of an enormous number of tasks. It can be used not only as a regular computer but also for many fun or practical projects. People have made truly incredible creations with the Raspberry Pi, and because of its GPIO pins, it can easily be integrated into electronics projects of all kinds. It was designed with teaching people programming in mind and is a great platform to do so. There are multiple Raspberry Pi boards, but the Raspberry Pi 3 model B+ is the best board and one of the most recent. The board itself costs only $35 but requires a micro SD card and power adapter. To act as a normal computer, a mouse, keyboard, and monitor/TV are needed as well. The Raspberry Pi is by no means a high performance computer and is not as fast as a Mac or PC, but still provides decent processing power. Although it may not look like it, the board is fully equipped with USB, Ethernet, power, and HDMI ports. The Raspberry Pi 3 B+ has built-in Wi-Fi and Bluetooth. Find out more about the Pi here and to learn about this specific board, click here.

About the LEGO model: I built this as a display model capturing the major details of the real computer. Note that the size is scaled up from the real thing to include better detail. The model was made using Studio. The first picture is a rendering made with Studio, while the rest are real pictures of the Pi with a custum sticker on the display tile since I couldn't have it custum printed. The Pi is built upon two large plates with a nice black border around it. At the front of the model is a printed tile indicating the Raspberry Pi model and two brick-built Raspberry Pi logos. Following are some of the board's features:

I think that it would be sold for around $20 - $30 and would be great for teenagers and adults (unless younger ones are interested in the subject as well).

I hope you like it and thank's for reading!