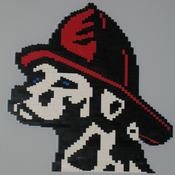 My Maxi Lego Forest Fire Fighter.  This fellow is a little bigger than the one Produced by Lego and number of years ago.  He has working geared arms, and wrists, gloved mobile hands, head swivels and hair under his helmet.  His face is covered by a Bandana to help minimize the smoke.  His hands and arms are operated through holes in his wrists and back using his wrench that is on his hip.  He has a back pack, two red feel bottles for his chain saw, his blue shake-n-bake fire shelter and some roles of coloured tape.  He is dressed with his Chain saw cut proof pants, boots, and Yellow fire shirt.  His forestry helmet has bright green reflective colouring.  He even has his ears protected.  He carries a wrench for his chainsaw…and adjusting his arms.  He also has a Pulaski axe with a chopping blade and a wide pick.  His saw is a Stihl chain saw….one of the biggest saws produced and used by the Fire Fighters.