The Legend of Zelda: BOTW 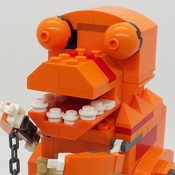 By TheBrickSeparator
22 comments
The Legend of Zelda: Breath of the Wild was one of the most anticipated games when it was announced!  Breath of the Wild made for a very different type of Zelda game with its open world elements and basically the ability to complete the game in whatever order you wanted.
This Lego version has the following features from the original game:
Link: The main character from the series who comes with his sword and shield. He also comes with his paraglider which he uses to fly around in the game.
Stone Talus: This character is made of gray bricks and slopes. To defeat him you have to climb up on his back and attack his soft spot. He has an arena at the base of a mountain in which you can fight him.
Lynels: Horse/human-like creatures that are one of the deadliest things you come across in the world of Hyrule. In the game they have different classes of difficulty based on their color. This one with the red mane is the easiest to defeat. He has a sword-like axe and is very fast. He shares the same arena as the Stone Talus.
Hinox: A dangerous creature that sleeps in the swamps of Hyrule. They collect weapons around their necks. There are two ways of stealing those weapons...one is to sneak up on them while they are asleep and carefully take it off their neck, and the other is to fight them in hopes of winning. He has a swamp built around him. Some believe the swamp is the same waters found in Wind Waker and Phantom Hourglass.
I built this because I loved playing through the game and it was unlike any Zelda I had ever played. It was extremely popular at the time and got some of the best ratings of a Zelda game ever.
I truly think this would make a great set because Lego has never done anything Zelda before, and why not with its most recent game...The Legend of Zelda: Breath of the Wild!