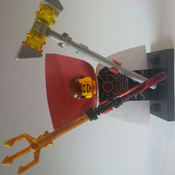 By o0BrickKid0o
2 comments
This is my own micro game I created.
This game allows 2-6 people to play as their are 6 different colour teams. The aim of the game is that you start at the end of your colour lane, you roll the first dice and move and then its the player next to you turn. If you are on the square next to the skull, you roll the second dice to choose a object and then roll the first dice again to make your way back to the start. It comes with 4 boulders, 6 sets of 4 different object, Diamonds, Daggers, Statues and Sun-Staffs

As you see in this picture, its the pink's turn and she rolled a silver which is two spaces and then landed on the last square so she had to roll the second dice to choose a object which landed on blue which is the dagger. To take the dagger back, the Pink would have to carry it on her head. The person who plays as the Pink will have to roll the first dice again to start moving back.

The characters are boys (red, blue, green and brown) and girls (yellow and pink)

So if this is a real set, the micro-figures will have to have faces and clothes printed on.

Here it shows the 4 different objects you get for each character, the 6 characters and the two dices and the plates you get with them.

For dice 1 the gold means move 3 spaces, silver 2 spaces and bronze 1 space, the multi-coloured plate is who ever rolled the dice misses a turn and everyone else gets a go but the person who rolled the multi-coloured plate will have to roll for the other players, the white plate means that the skulls opposite your characters lane will cause a boulder to go onto the plate in front of the one your character causing you to miss two turns and the purple means you can place a boulder on anyone's path causing them to miss a turn.

For dice two the red is for the diamond, the blue for the dagger, the orange for the statue and the green for the sun-staff. The two white makes the player rolling roll again until they land on a coloured plate. So all these plates would have to get images printed on except for the multi-coloured plate. 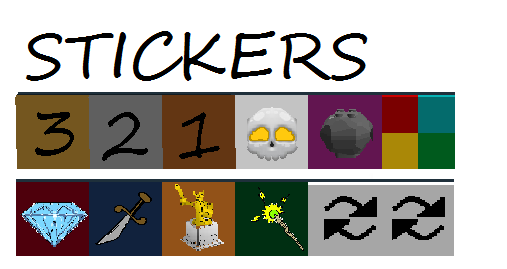 These are what the stickers would look like on the dice plates, the top row are for dice 1 and the bottom row is for dice 2.

The skull has yellow eyes for the curse that runs through the skull head.