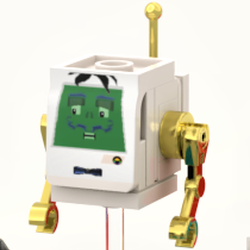 Alphanumeric!
Based on the groundbreaking animated television show ReBoot, this set aims to bring back classic ReBoot to fans in an all new format!
The evil virus Megabyte and his chaotic sister, Hexadecimal, have caused some serious down-time in Mainframe! Megabyte's bumbling henchmen, Hack and Slash, have captured several binomes to try and access their P.I.D.s (Personal Identification) and turn them viral. It's up to our Guardian, Bob, and his new found friends; Dot and Enzo Matrix, not to mention Enzo's canine-pal Frisket, to rescue the binomes and put those viruses in file-lock!
This set includes Minifigures for Bob (with Glitch), Dot (with personal organizer), Enzo, Megabyte (with claws) and Hexadecimal (with energy blasts and clear 'hovering' stand). Buildable figures include Frisket, Hack and Slash, as well as the binomes Old Man Pearson, Dot's Secretary, Rollerblader, Herr Doktor, and Lt. Chauncy.
Frisket is one big dog! He can help out our heroes by giving Lt.Chauncy and Herr Doktor a good kick in the bitmap! Each viral binome can be attached to Frisket's mouth via a 1-stud connection
Hack and Slash may be low density, but they make up for it with brute force! Hack and Slash feature removable jetpacks and can be spun at the waist to knock down minifigures and binomes!
This set also includes two large interactive elements:
Bob's V262 Turbo Drophead Car - Fits Bob, Dot and Enzo. Use Bob's Glitch accessory to activate a hidden disc launcher!  Comes with 4 'delete-discs'.
Binome P.I.D. Extraction Chamber - This platform stores all five binomes. Herr Doktor is distracted with his solitaire game while Lt. Chauncy keeps watch over the captured binomes. Swoop in with Bob's car to knock down the archway and free the binomes!
I love ReBoot. It has been an ever present thing in my life that will always have a special place somewhere in the deep recesses of my arteries. I had the toys as a kid, and still have them as an adult.  It has always been an interest of mine to try and make ReBoot in lego, but until very recently I have always given up, just assuming that ReBoot's distinct style and presence would be impossible to translate. But I tried and tried again and eventually it just worked. I had to make compromises here and there obviously, but I feel I have successfully managed to some degree to get not just how it looks, but how it "feels".
This set was initially much, much larger and more ambitious. Unfortunately I simply didn't have enough pieces to achieve something on the scale I originally planned.  But I worked through it.
I decided to focus solely on the brighter more fantastical world of the first two seasons purposely, I knew this set not only had to appeal to fans of the show but be approachable to an all ages audience. Characters had to be dropped, cost was a major factor as well. It was incredibly difficult narrowing down characters, references, and even whole sets I wanted so desperately to build, but in the end I went for a balance of generalized and specific.
Binome Rescue takes inspiration from several episodes, the most from v1.12.2 "Identity Crisis" with the overall premise of the set lifted directly from the episode. The P.I.D.code-cracking screen and the removable archway are visual references also from "Identity Crisis", the miniature solitaire screen from v.2.4 "Bad Bob" and a hidden mouse insignia behind one of the terminals, v1.7 "The Crimson Binome".
Bob's car, and the rest of the characters are seen throughout the series, allowing for more generalized play that is less tied to the narrative of the set.
It is my goal to celebrate the legacy and spirit of ReBoot and bring it back one last time to fans new and old.
Thank you for viewing this project and thank you even more if you decide to support it.
I look forward to continuing to tinker with these builds and will update as improvements are made.
Stay frosty!
18