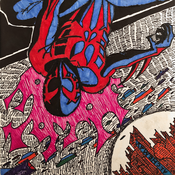 By TARDIS06
10 comments
At the top of the tallest mountain range, and the forefront of humankind's distant future, lies the utopian city of Zenith and its people.
While some are at the height of their lives here, freely playing arcade games with their friends or getting their daily cup of coffee, others try to pick up the pieces of their old world; where vigilantism and heroics were commonplace.
Yet for good or bad, these people live here now, in Zenith, having survived the era of cyberpunk, and continue forward into a joyful new dawn.
---
Contained within this large chunk of Zenith are three main levels for display and minifigure play-ability, aside from the sidewalk, alley, and roof that are freely open, of which the first two contain vending and arcade machines, the structure opens like a doll house to reveal the inside of the carryout restaurant, apartment, and the vigilante's hideout (that is also accessible via the sewer grate for whenever a surprise entrance is needed).
For play features, there's the good vs evil of the vigilante against the malfunctioning security drones, a hovercraft that is very swoosh-able, and a laser gate in the mountain that can open to allow the vigilante's flying motorcycle to take off with just a flick of a finger.
Not to mention the shear soothing fun of playing with the characters, and having them get into all sorts of mischief, while just having a swell time and creating one's own stories.
This project is not only a love letter to post-cyberpunk, but to a forgotten childhood.
It's a simple premise for a not so simple world.