The Tumbler (with Detachable Batpods) 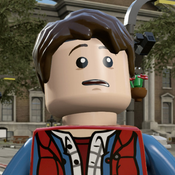 This is the Tumbler, as seen in Christopher Nolan's The Dark Knight. Although Lego has officially released a few versions of this iconic vehicle, this one tops them all. This version of the Tumbler is exactly to scale with the lego minfigure, and looks closer to the movie version than any of the previous sets.

What makes this build especially significant is the fact that it houses the Batpod, the bike that Batman uses in the movie. Just like in The Dark Knight, the front tire pops out to reveal a smaller vehicle for the caped crusader to ride. This particular version actually comes with two Batpods, giving this model even more potential. The last picture I've included actually gives a closer look at how both bikes are integrated so seamlessly into the design.

The top of the model lifts up to reveal a simple but clean interior design. The interior of this model is a cool gray, and comfortably sits one minifigure. There is also a place to put two batarangs in between missions.

The primary focus of this model is playability, but the detail and scaling make for a great display piece as well. The set comes with two minifigures, both previously featured in other Tumbler related sets as a nod to Lego's earlier versions. The build itself is just over 200 pieces, and I expect it would sell for $25-$30. This vehicle is an absolutely essential part of Batman's massive arsenal and an iconic movie prop. The TUMBLER (with detachable Batpods) would make a fantastic addition to any Lego collection. This is the Lego that set Gotham deserves.