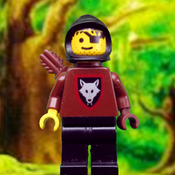 This Forest Outpost Siege set contains everything to play LEGO Construct & Command and consists of a small castle outpost and landscape, 10 minifigures of 2 different factions, enough equipment to arm your factions in multiple combinations, a rulebook, a Medieval Era Weapon Sheet, five d6 dice*, and one "rangefinder". This set/map can be used both as a siege Command Board (one faction starts in the castle, the other attacks the castle) or as a forest map by playing with both factions starting on opposite ends of the Command Board and battling in front of the outpost. The set, as pictured above, contains approximately 400 pieces and we think should cost $60. With this starter set, you will have the ability to construct epic clashes between your medieval minifigures and bring in other minifigures to join the battle! This starter set is perfect for a standard match, a small castle siege, or a RPG!

*d6 dice will be official LEGO dice, unfortunately we didn't have any for photos.

We hope to create a balanced, fun, and strategic game for medieval LEGO. If you're interested in learning more about LEGO Construct & Command or playing the game with your own LEGO, check out our website at www.legoconstructandcommand.com where you can download the current ruleset and get the latest updates!

How the game is played

Combat in LEGO Construct & Command is determined by the roll of die. An attacking player will roll their die in an attempt to roll higher than the defending player. If the attacking unit’s dice exceed the roll of the defender’s roll, plus any applicable bonuses, the defending unit is removed from the board. If the attacker’s roll ties or is beaten by the defender’s roll, the defending unit remains standing. With an understanding of the base gameplay and mechanics, this set provides many ways to play LEGO Construct & Command!

Standard Play − Standard Play matches are between two players. Players must set an amount of gold available to each of them to purchase units, the era that they will pick units from, and finally the Command Board that they will Construct & Command on. Once the three conditions of the game are determined, the players will begin to spend their gold on units and equipment from that era. See the attached equipment sheet for an example. Note that the gold limit can be as high or low as the players want, but they must be sure to have all the necessary LEGO pieces to play what they want to use!

RPG Scenarios − LEGO Construct & Command offers an easy transition to a more story-based, persistent format of role playing. Just take your favorite minifigures, equip them with starting gear or abilities, and then construct the world around your minifigures. Start out your adventure from a small forest outpost or reclaim the keep from a group of bandits that has taken over! Whether you want to make a mage, barbarian, or rogue, the possibilities are endless. You can play with as many friends as you want. Choose to have a campaign-master commanding the opposing forces or create your own campaign together!

Why we think LEGO Construct & Command is perfect for LEGO

When we created LEGO Construct & Command, it sparked something in us. In our very early 20’s, we still liked the idea of LEGO and had a token set or two displayed in our rooms, but most of our LEGO were tucked away in boxes in our family homes. When we created the game framework, we looked at our old LEGO that suddenly had new life. Old castle sets became the perfect environment for epic battles. Our childhood favorite knights and ninjas became generals on the battlefield. We believe that LEGO Construct & Command brings new life and purpose to LEGO, especially for the AFOL community. We still love to make scenes and build awesome structures, but nothing really beats testing your strategic mettle against your friends.