Wow! 200 Supporters! Thanks so much, all! Let's keep pushing and spreading the word so I can give you two more minifigure ideas at 500 supporters!

For Narnia and for Aslan!

Thanks Lego Narnia fans! Another Lego Narnia project reaches 100 supporters!! I've been super-pleased with this project and how quickly it has received a positive response. We broke 100 supporters much faster this time and that's thanks to many of you who spread the word. Don't get me wrong, 100 is still a far cry from 10,000, but we're on the way. In fact, this project hit 100 so fast, I wasn't quite ready with my next minifigure to post. But here it is now: Prince Caspian himself! 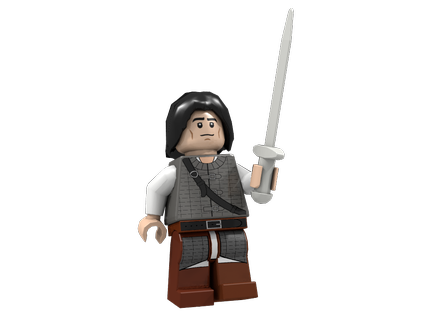 Caspian is, of course, the title character of the second novel, and Ben Barnes brought him to life brilliantly on the big screen. This minifigure is based off of his appearance in the movie. I have plans for a set idea that will include Prince Caspian, but that is quite a ways down the road. In the meantime, enjoy this little tidbit and help keep the momentum rolling on this project.

"For Narnia and for Aslan!"