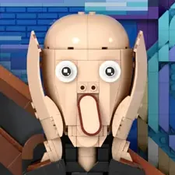 NASA Artemis Space Suit, also known as Exploration Extravehicular Mobility Unit (xEMU), is the latest spacesuit being developed by NASA for the Artemis Program to return to the moon. Please click SUPPORT to make this moonshot project a real LEGO set!
This 1:7 scale model is a fun-to-build "legonaut" that consists of the pressure garment assembly (PGA, the "suit") and exploration portable life support system (xPLSS, the "backpack").
Backpack:
The backpack is loaded with LEGO mini-builds of the life support system components: oxygen tanks, carbon dioxide scrubber, cooling water pumps, ventilation fans... Enjoy mini-builds and their assembly:
Suit:
The backpack is also a hatch door to open the suit to enter. Unlike any other lego mechs, the upper torso is hollow like the real space suit (for the sake of reality as well as reducing load on the legs)! The hinges and technic parts made it possible to realize the realistic curves and rigid structure in the tricky, limited real estate. You can also move all the joints- the shoulders, elbows, wrists, fingers, waist, hips, knees, and ankles to strike poses.
Bonus:
The set comes with two minifigures who represent the "First Woman" and the "Next Man (since Apollo 17 in 1972)" who will walk on the moon in 2024. Thus, this set has a total of 2024 pieces! Since we do not know who will be the first woman and next man, this set includes several colors of minifigure heads for diversity and inclusion.
The new NASA program "Artemis" was named after the twin sister of Apollo in Greek Mythology. It has been 49 years since the last Apollo program moonwalk. With this LEGO set idea, I'd like to celebrate the current effort of engineers and scientists all over the world to make the historic return to the moon happen, as well as inspire the next generation of space explorers. I believe this lego set would be a great addition to the LEGO space exploration theme and your LEGO collection!
Thank you very much for your support!
P.S.
Please take a look at other projects, too! If you are interested in the NASA spacesuits, check out Brickheadz Astronautz: NASA Spacesuits. My "Brickheadz Astronautz" series started with the SpaceX Launch and Entry suit.