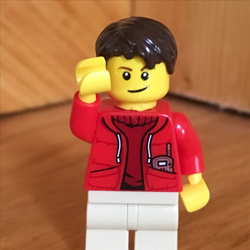 The Hover Destroyer is the ship with an opening front to get in and guns on the side to shoot and protect. It has landing feet used to land off of Landing Pad and it has little feet used to lock in to place on the Landing Pad. It has boosters on the back wings and two big boosters for moving places and to turn.

The Landing Pad has a belt to carry the ship down to the Landing Pad. The Landing Pad has little slots on the side to help the ship lock in to place. And it has a pole that stick out to slide in to the bottom of the front of the ship to also help to hold it in place. It is all made out of Technic used only from peices from the Techbic set road side repair. It’s super cool and it took me a while to build it so I hope you like it! (: