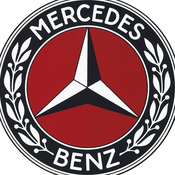 By Wilbert Roos
26 comments
What it is. Well, it is a Mercedes truck. it has a fifth wheel on the back, and in there, you can attach any trailer.
I built it from the Mack Anthem 42078 set. So I first built the trailer, and from the remaining pieces, I built this truck.
The cab can tilt forward, and then it reveals a 8 cylinder motor that functions when you drive with it. Also, the bumper doesn't touch the ground when you tilt it.
It steers freely.
I used the instructions from the Mack Anthem truck instructions to build the bumper.
The trailer does not hit the bumper when you steer with it.
On the roof there is a 8 bulb LED bar on top, between the two aerials.  It is a sleeper, and there is a bed in it.
On the sides of it, in front if the back wheels, there are two fuel tanks.
On the back-top of the roof, there is a backup light, and blinkers.
The doors can open, and there are two steps in front of the front wheel. In the cab, there are two seats and a bed. There is a dashboard as well.
Both of the symbols are on it.
Why I built it. I built it because before this truck, I had a different Mercedes truck, but it was out of proportion.  I then decided to take it apart, and then I first built the 42078 trailer and container, and then built this truck from the rest.
I believe this would be a great set, because, 1. There has to be more Mercedes sets, now that 42043 retired, (to my greatest displeasure), 2. There aren't any cab-over trucks as separate sets.