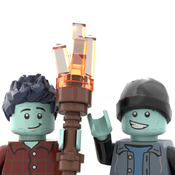 Hello everybody and welcome to my new build: Pixar's Onward.  Before you read any further please hit that support button to help Barley and Ian reunite with their dad!  Also do me a favor by helping me out and sharing this on social media to get the word out, because unfortunately I do not have access to social media.  Thank you!
If you don't know, this LEGO project is based on the Pixar movie Onward that came out March of 2020. It is about two brothers who lost their dad at a young age and our trying to see him once again.  Now, I don't want to spoil it for those of you who haven't seen it but I advise you to watch it because it is a great movie!
Alright now on to the LEGO project I have for you.  This is the Lightfoot's house and van (named Guinevere) depicted in LEGO bricks.  I tried to put as much detail into it and make the layout almost exactly like the movie but I ran into some snags: looking at the layout of the rooms in the movie and then looking at what the house looks like on the outside, I deduced that it is physically impossible for what they have inside the house to fit inside what they show the house looking like.  Therefore there are some changes to the layout, such as the shape of Ian's room and the upstairs area.  Other than that though the layout is basically movie-accurate.
This set includes 2089 pieces (due to the attention to detail, but I feel that we could slim that down if needed for a lower price tag), 3 minifigures and a pet dragon (Blazy), 1 van named Guinevere, 1 wizard's staff with phoenix gem attached, 1 Quests of Yore book with spells inside (QoY is the role-playing game Barley resorts back to in the movie for spells.  It resembles our Dungeons and Dragons type of games), and 1 mushroom house!
Inside that mushroom house we have 4 rooms on the lower level separated by archways: The Entryway (which includes the stairway), The Living Room (with TV, fireplace, comfy couch, coffee table, and yoga mat), The Dining Room (with dining table, Quests of Yore figurines, and a game board to play the game on), and lastly The Kitchen (with fridge, oven, sink, greenery, cabinets, counter, and a door leading outside).
The second floor houses Ian's room plus a little hall area when you would come up the stairs.  This area includes a grandfather clock, a vase and table, and a purple rug.  Plus Ian's door has a sign on it.  In his room we have his bed, desk, radio, dresser, and rug.  The shape of the room is different than the movie but that is the only way I could fit it in.
I also mentioned Guinevere, the purple van named by Barley.  This includes a unicorn painting on the side of the car (which right now is only photoshopped on there so forgive the crudeness of it) and an interior for Barley and Ian to ride in on their quest.
One function I am always looking to add is playability.  To do this, since this house has so many levels, I made it so that every level is able to come off easily.  The whole house breaks apart into 5 pieces, 4 of which carry rooms while the other one is the tippy-top roof.  This allows for everyone's hand to get inside and move things around.  It also enables people to take it apart easily to look at the details inside.
In conclusion, I am really proud of this project and I've worked a long time to perfect it.  Please, if you have any ideas or suggestions, comment and let me know new things or cool features that can be added!  I love this set and I hope you do too!  If you do please show your love by hitting that support button and helping us along on our quest to 10,000 supporters!  Thank you for reading and supporting and always make sure to put it into O for Onward!