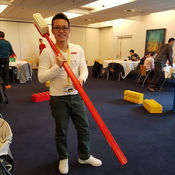 The W900 is a Kenworth Class 8 truck model in production since 1961, known for its long-nose style.  The stylish W900 remains in production today due to its particular popularity with truckers.

From the day it was introduced, the W900 reflected a dramatic departure in heavy-duty trucks. It brought the road to life for drivers and owners alike. Set the pace in long-haul performance, reliability, ease of maintenance, productivity and sheer luxury. Combined ready-for-anything functionality with beautifully aesthetic design like never before. And proved as comfortable behind the wheel as it was on the bottom line

This is a Mini-figurine scale replica of the iconic W900 model, showcasing the many intrinsic details that makes the W900 a real trucker's truck. The studio sleeper portion is designed in such a way that it can be opened to reveal the details within. I build this model with the aim to be stud-less, to be as realistic to the real-life W900 as possible.

There is a huge worldwide fan base of Kenworth trucks and this would be a welcome addition in their collection, introducing creative building methods using bricks that can be a fun-filled family activity at the same time.

Hope to have your support to make this project a reality!