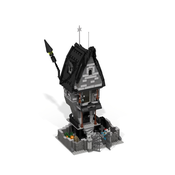 He is acknowledged by virtually every law agency on Earth as the world's number one thief.
Often in his adventures, he and his colleagues, will take it upon themselves to foil other criminals engaged in more  crimes.
While first glance may imply our protagonist as fun-loving, flighty, perhaps even "goofy", his surface facade overcoats a brilliant imagination and a thorough knowledge of a hundred varying sciences. Forever extemporizing and reevaluating, he has been responsible for heists no right minded individual would believe possible.  His infatuation with F.  is perhaps his most significant weakness, as it lands him in undesirable situations most of the time,like arrested and jailed on numerous occasions, typically by his nemesis: The Inspector  Z.
With this project I would like to celebrate a great character with one of the classiest car: the Alfa Romeo 2300 Touring 1932.
Built with 426 bricks,this set will include

​WIth this set I would like to introduce in ours Lego cities the world's number one thief  with his classy car,an icon that almost all of us grewed up with.Can you help the inspector Z. to catch him and his colleagues or do you want run away with L.III and the stolen treasure?Let's play with them and if you like it,please,support and share!
Thank you all in advance for critiques and suggestions to improve this project.

If you want,check and support also my other project,inspired by the Tim Burton's movie "The Nightmare Before Christmas",The Jack's House:
https://ideas.lego.com/projects/96183/updates
Feel free to share it,sharing is the best help to reach 10.000 votes,thanks =)