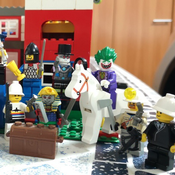 This is a spectacular and modular Medieval Castle. You can play with it in different ways: it can be opened and closed with the apposite lego piece on the back side.

On the left tower on the back side you will find the black catapult, a weapons rack, the king’s horse and a brown folding stair, which soldiers can climb in case of enemies attacks.

On the right tower on the back side you can find the blacksmith manufacturing the soldiers swords, shields, helmets and armors, with his forge and hammer.

In the castle inner part you will discover other three spaces: the central castle hall, with the big brown gate, the wishing well, the high chandelier studded with diamonds, and two sentinels; and on the lateral sides there are a wooden table with gold and silver cups, and some misterious treasure chests.

On the superior floor there are the archers patrolling between the castle battlements and other two staircases introducing you to the highest central tower of the fortress.

In the central tower there is the king’s removable throne, protected by other two guards and the king himself. Behind the throne there is a hidden stair conducing to another secret room and treasure.

The final touch is the frontal drawbridge. You can lift or lower it with the apposite lateral reel and create fantastic stories with your friends.