LotR the Wall of Helm’s Deep 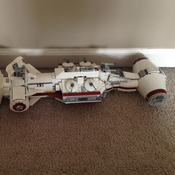 By JJJFord
34 comments
In this build, I recreated part of the wall to Helm’s Deep, which held an important battle that took place during the Two Towers.
I have always enjoyed this scene and even though this is already an actual LEGO set, I thought the wall should get more attention.
This is built on a 32x32 baseplate, having the wall part 32 studs wide and 16 studs deep. It has two ladders, a rock, some rock work on the sides, a one stud deep toe of rock that runs along the back of the wall, and the stream that was used to blow the wall. Unlike the movies, this wall cannot blow or separate.
I mainly used dark and light gray for the wall and added different pieces to make it appear battle-worn. In front, there is some light brown for the grass and darker shades of brown for the mud that was caused by the rain and battle.
As you may have seen, there is a spot beneath the wall to act as the caves that the people hid in during the battle, and you can store plenty of mini figures under there.
For the mini figures, I think it should include Aragorn, Legolas, Gimli, Eomer, some Uruk-Hai, and maybe Theoden. I think it should come with quite a few because of its size, but not too many as that would be unrealistic.
I think that this would make a great set since Helm’s Deep was such a memorable battle and it would be a great way to start the return of LEGO The Lord of the Rings.
I hope you enjoyed this project and please support it so one day it may actually become a real LEGO set one day. I hope you have a fantastic day and please support this project!