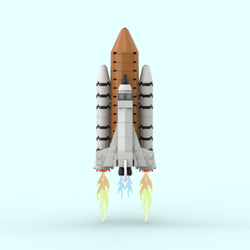 BriocheRockets
33
318
days left
Project Mercury, 1958-1963, was the first human spaceflight program of the United States.
The Mercury-Redstone was the first human-rated rocket of the United States. It carried Alan Shepard into space, making him the first US astronaut to do so.
I chose the Mercury-Redstone because it is so often overlooked. The Mercury program was an important step towards eventually landing the Apollo missions on the moon and it deserves recognition. This model could shed some light onto Project Mercury, and teach many people about how Apollo came to be.
This model is of NASA's Mercury-Redstone Launch Vehicle, complete with accurate staging.
There are 4 separate parts, The booster, Capsule, Retrorockets, and the Launch Escape System.
My 3rd rocket, so stuff like the capsule is still quite rough.
Thanks for viewing this project, I'd appreciate a support! :)
And thanks to everyone who supported!
33
318
days left