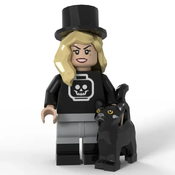 By NadaL
92 comments
We all know the story of the most famous vampire - Dracula, written by Bram Stoker. It is one of the most iconic fantasy novels ever written. This, however, is a different story (with some similarities):
_
On one dark, foggy night, a new family moved in to the Street of Horrors. It is an old noble family, no doubt, but looking quite eccentric. They are all very pale with large vampire teeth. They can only be seen outside the house after sunset, going for a walk or coach ride with their baby at midnight. The house looks completely abandoned during the day, nothing moves in there, no lights are lit, no sound made. And the number of bats suddenly flying around is enormous! Strange things are happening ever since and the neighbours got suspicious. What if they are some kind of monsters? What if the man is HIM? The legendary Count Dracula himself?
The neighbours decided to hire a detective to find out who they are. Many of them refused to take this job after hearing the details, except one - a young, brave, new to the business, enthusiast in everything supernatural - Detective Seward. He has been observing this family for some time and has taken many photos, but not a single one shows them! How is that possible? He started to research the unliving/undead creatures in detail and found the answer very soon, he is spying on the real vampires! Although, it may be very dangerous, he is keen to do this job and discover every single detail about this family…
_
Count Dracula decided to move from Transylvania to England one day. He has found the perfect house in London on the Street of Horrors and finalized the building decor according to his taste. Now, when everything is prepared, he is bringing his family here, his wife Countess Mirena and their baby Dracula Junior. He is also bringing his most trusted and loyal servant, who has also been his closest friend for centuries, Jonathan Harker. He is Dracula's butler, and his wife Mina is baby Dracula's nanny.
The reason for relocation is very simple, they wanted to live in a buzzing metropolitan city surrounded by many other noble vampires. They love their new life in London, despite the fact that the neighbours don't seem to be happy about their presence, hiding behind the window curtains once they gaze upon them. One thing, however, really annoys them, some young detective is constantly following them everywhere they go, night after night. He is even trying to take photos of them! Does he not know that vampires cannot be photographed? What is he up to? What will they do about him?
One day, they realized...
Well, I leave the rest of the story to your imagination.
_
Dracula's House is made of 2921 parts, built on a 32 x 32 baseplate, includes 6 minifigures, one skeleton horse and a coach.
Meet the minifigures (from left to right, picture 7):
Detective Seward, Jonathan Harker, Mina Harker, Countess Mirena, Count Dracula and baby Dracula
The building consists of 4 levels:
The building is modular, and every floor is accessible through the top.
There is a possibility to include the red Light Brick to enhance the atmosphere and theme (please, see picture 13 with red "Light Brick" label).
There are many interesting elements such as Dracula's letter to his dear friend Van Helsing inviting him to dinner, the Dracula family crest as a part of the fireplace, or the book of Bram Stoker's Dracula as a tribute to the original novel and the author.
I'm a big fan of LEGO Buildings & Architecture and if there is a scary element involved, that's the best possible option for me. I'm also the fan of horror novels, so building an impressive and detailed house and adding this story to the creation was a logical step for me. I would love to be able to purchase more of such real life LEGO sets. Dracula was part of LEGO sets a long time ago (e.g. Castle) and I think it is time to bring him back to a new role, new look and new place to live his LEGO life.
I believe Dracula's House on the Street of Horrors would make a great LEGO set thanks to the detailed house which enhances the building experience, all the small details inside and outside the house to explore, the popularity of the spooky theme amongst LEGO fans, various special elements for amazing playability and a plenty of space for fantasy thanks to the open end story behind it.
I hope you enjoy the Dracula's House as much as I did while creating it.
Thank you for your support!