Gunstar from "The Last Starfighter" 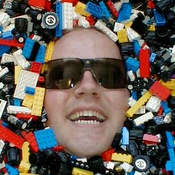 First of all, I don't expect this project to be build at this scale or with this level of detail.

I doubt that The Lego Group would be willing to produce a UCS-style set for the Idea line!

Even I wouldn't build this the same way!  It weighed a TON and was difficult to handle due to its particular shape.

However, I still think that it could make a terrific model if re-interpreted at a more reasonable scale and constructed with fewer bricks to make it lighter and more structurally sound.

The Gunstar is a truly unique design (by Ron Cobb of "Alien" production design fame) and I was actually contacted by Larry Yaeger, who was part of the CGI team that brought Ron Cobb's vision to digital life!  He very kindly complimented the accuracy of my attempt!

I hope you enjoy the pictures, and I hope that we all get the chance to be recruited by the Star League to defend the Frontier against Xur and the Kodan Armada!