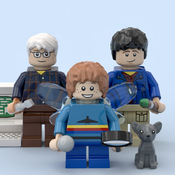 Presenting The Neighborhood of El Chavo, this LEGO set is based in the beloved Mexican television sitcom that continues to have enormous popularity in Latin America, Spain and other countries including the U.S.

The show is centered around the adventures and tribulations of the characters that inhabit this fictional neighborhood and more so around the title character “El Chavo” (The Kid).

El Chavo first appeared during 1971 and ceased production in 1992, since then major television networks air the show to this day and continues to have enormous popularity among its growing international audience.

This 900 pieces set depicts with great detail the courtyard of this neighborhood, the facades of the houses with some interior decorating, it comes with the main characters: The Chavo, Chilindrina, Quico, Ñoño, Mr. Barriga, Professor Jirafales, Mr. Ramon and Ms. Clotilde.

Every detail has been taken into account, from El Chavo’s famous barrel, the staircase, the laundry area and more, even a look of the street side.

This set is bound to be popular among those who grew up watching the show as well as new fans who are falling in love with it, they will be able to recreate the amusing situations of the show and come up with new ones, endless possibilities just like any LEGO set should be.

This has been a labor of love and respect for the show and the thought that fans old and new would like to be closer to it by means of this set.

Please consider voting and sharing with your friends to make this set a reality.