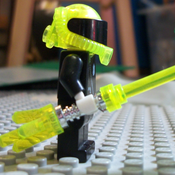 Space. The final frontier. Explorations have been sent out by minifigurekind many times. Probes, shuttles, satellites etc. Lego sets have been produced of ships and probes, however we don`t see how these probes were launched. This set changes that, with a focus on the launcher instead of the probe itself.

The power source is a special crystal with enough power to last the launcher for a year. The crystals are mined from the mountains by a miner. A scientist then inserts it into the generator, and it starts to suck the power from it. The power goes through the generator and into the launcher. Another scientist checks over the generator, making sure everything is working, and one more locks the target and presses the button that makes the bomb go. A maintenance man fixes any issues with his tools and two guards protect the generator from peeking eyes. A security camera atop a mound of rocks watches over the whole thing.

The set includes 7 minifigures and around 20 accessories. It comes with about 10 crystals. The launcher, satellite, cooling fans, and chair rotate. In the final picture, the arrows show the path of crystal power, electrical energy, and excess waste. Green is crystal power     yellow is electrical       red is waste gas.

Thanks for looking/supporting/following! Be sure to check out my other projects as well as others I've supported.