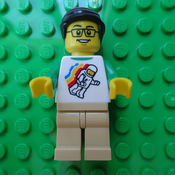 This well-prepared team of garbage aliens is ready to get rid of space debris and keep your galaxy clean!

The Triton Team is formed by one of the most organized species in the universe, and if we analyze them carefully, we may notice some interesting characteristics.

As we can see, they already got some waste to collect.

The Triton Team thanks you for supporting their cause for a cleaner galaxy!